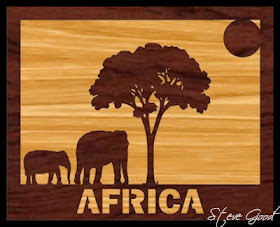 Africa is the world's second-largest and second most-populous continent, after Asia. At about 30.2 million km² (11.7 million sq mi) including adjacent islands, it covers 6% of the Earth's total surface area and 20.4% of the total land area With a billion people (as of 2009), in 61 territories, it accounts for about 14.8% of the World's human population. The continent is surrounded by the Mediterranean Sea to the north, the Suez Canal and the Red Sea to the northeast, the Indian Ocean to the southeast, and the Atlantic Ocean to the west. Not counting the disputed territory of Western Sahara, there are 53 countries, including Madagascar and various island groups, associated with the continent. (Wikipedia)

The African elephant is the largest land animal on earth. They are just slightly larger than Asian elephants. African elephants also have larger ears that are shaped somewhat like the continent of Africa. Their ivory tusks caused them to be hunted to dangerously low levels. They are now protected but illegal poaching keeps their populations from growing.

The Scrollsaw Workshop is primarily supported by donations. If you enjoy this Blog and would like to make a donation please click this link. Your support is greatly appreciated.
Make A Donation
Steve Good at 9:36:00 PM
Share
‹
›
Home
View web version